Mussoorie is one of the most popular hill stations and the most romantic hill station destination for Indian couples and also a loner’s wonderland, nature lover’s paradise, located at a distance of 290 km from Delhi and 35 km from Dehradun, Uttarakhand. Mussoorie with a backdrop of Shivalik range of Himalayas and doon valley, Mussoorie, also known as Queen of The Hills, stands at an altitude of 7000ft/ 2005mtrs above from the sea level and has a cool, pleasant climate throughout the year. And also the fact that mussoorie was a popular holiday destination during the British era can be seen from British remnants in the city, such as the archaic architecture of the hotels and churches.

Ones you visit Mussoorie you cannot wipe off the memories from your heart as the beautiful hill and valleys will always remind you of your betrothal. Mussoorie is the top famous hill station in India, Famous for weekend getaways, honeymoon destination, Himalayan views and mall road. 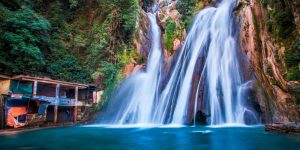 Places to Visit in Mussoorie

The Mall Road, Mussoorie: Mussoorie Mall Road is the next place in the list of places to visit in mussoorie, The Mall Road Located in the heart of Mussoorie, the Mall is a colonial relic with benches and lampposts filled with modern shops, video game parlours and skating rinks. You can often find the author Ruskin Bond browsing the Cambridge Bookstore. In The Mussoorie Mall Road, there would be a lot of local vendors around including photographers who can click awesome photographs for you. You can try out a photograph in local traditional attire here.

Gun Hill, Mussoorie: Gun Hill is the next place in the list of places to visit in mussoorie, Gun Hill is the second highest point of Mussoorie standing tall at an altitude of 2024 meters! The scene from the top of this hill is a panoramic 360 view of the snow-clad Himalayan ranges right beside the widespread Doon Valley and a full view of the Mussoorie. The Gun Hill, located 400 ft above the Mall Road, is a popular attraction, especially amongst the photographers and nature lovers. Gun Hill is Located just 2km from Mussoorie Mall Road.

Lal Tibba, Mussoorie: Lal Tibba is the next place in the list of places to visit in mussoorie, Lal Tibba name literally translates to ‘red hill’. Rising to a height of 2,275 meters (7,164 feet), Lal Tibba is the instagram picture-perfect place to fulfil your sightseeing desires. Lal Tibba is located on the top of the Hills in Landour, around 6 kilometres from Mussoorie Mall Road. Being the highest point in the area, Lal Tibba is one of the most stunning viewpoints in the Mussoorie region. There are only a handful of places that offer such thrilling views and being in Mussoorie, it is somewhat necessary to tick this off your must-visit list of places to visit in Mussoorie. Lal Tibba is around 5km from the Mussoorie mall road, you can reach lal tibba via road the route of picture palace followed by Char Dukan.

How to Reach Mussoorie

How to Reach From Delhi to Mussoorie: You can Just Hire a Private Taxi from New Delhi Railway/ Bus Station or International Airport, Mussoorie was situated 290km from Capital Delhi, You will reach there by road in 6-7 Hours. You can book bus tickets also from online or offline you will find many local or private buses also from Delhi to Mussoorie.