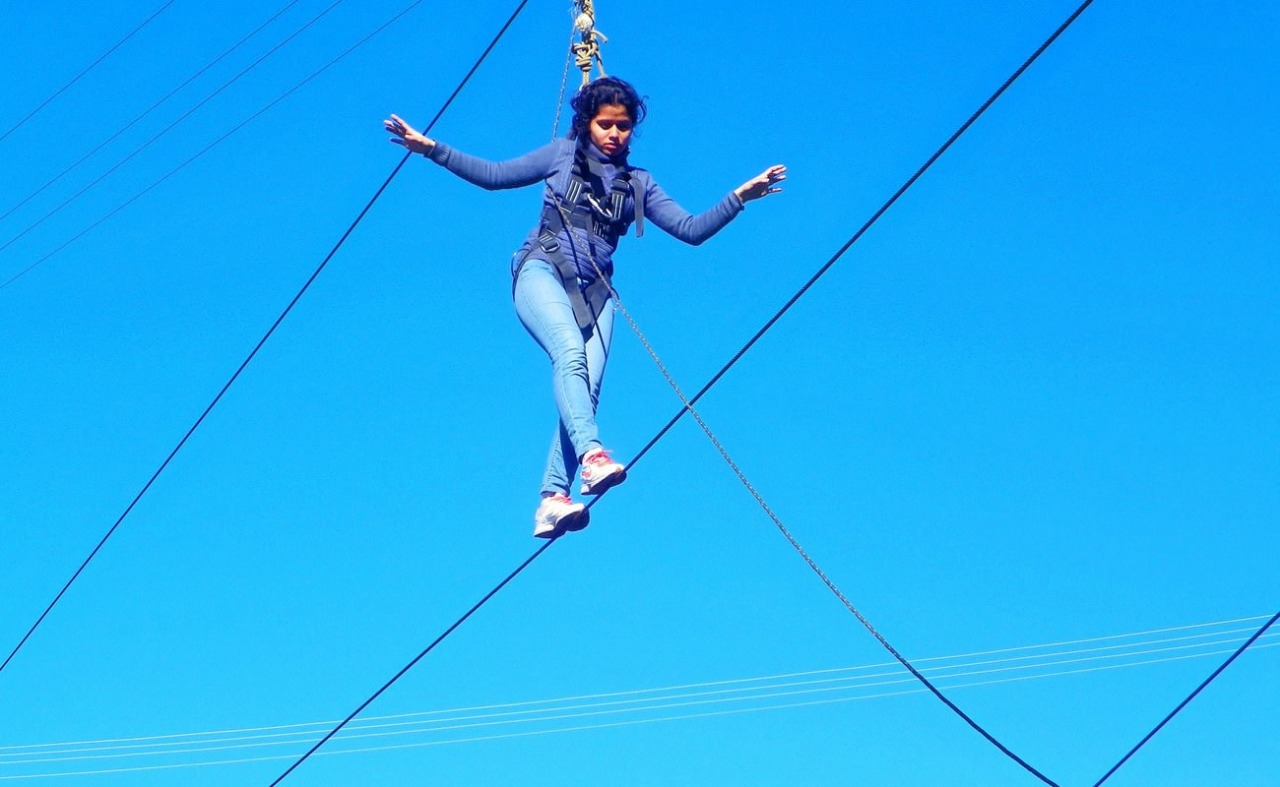 Before Going to Surkanda Devi Trek (Must Read)

Surkanda Devi is a famous hindu temple ( shaktipeeth ) near to kanatal at an Altitude of 10500 feet close to famous hill stations like Mussoorie( Approx 35 kms ) , Dhanaulti ( Approx 06 kms ) & Kanatal ( Approx ( 06 kms ) .  Surkanda devi temple is surrounded by Dense forest. And attracts many locals during a festival during May & June.

According to the mythology, this place is associated with legend of Sati, a wife of lord Shiva and daughter of King Dashrath. King Daksha was not at all happy with his daughter’s choice of Husband & when a performed a grand vedic sacrifice, he did not invited lord Shiva & Sati , So, Sati threw herself onto the fire, which made the sacrifice impure, because she was all powerful mother goddess.  So, Sati left her body to be reborn as the goddess Parvati.  Shiva was very angry for the loss of his wife. He put’s Sati’s body over his shoulder and began Tandav throughout the heaven & didn’t stop until her body was completely Rotted away. All the Gods were afraid of Shiva’s Tandav & followed Shiva . Then Lord Vishnu sent his sudarshana to destroy the corpse of Sati.  So, according to myth, there are 51 pieces of Sati’s body scattered across the Indian subcontinent. These places are called Shakti Peethas. When shiv was going back to Kailash carrying Sati body , her head fell at the spot where Surkanda devi stands now.

This ropeway will be an alleviation to the aficionados and vacationers coming for the darshan of Maa Surkanda Devi. Prior, they needed to stroll by walking from here for something like 2 hours, while they will actually want to handily arrive at the spot. He additionally added that this assistance will likewise assist with expanding the occupation of neighborhood individuals, alongside giving a lift to experience and strict the travel industry. 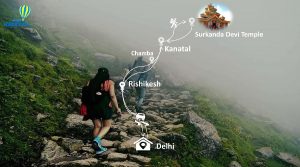 Surkanda Devi is easily accessible by many routes. Either you can come through Mussoorie Road or Through Rishikesh Road.   Geographically Surkanda Devi is approx. 80 kms from Rishikesh & approx. 70-75 kms from Dehradun. if you are a new driver on hills , then we better suggest you to come via rishikesh as the roads are wide and in good conditions.

Visitors have to trek around 2 kms from Kaddukhal, which is the nearest town to reach the temple. Kaddukhal is well connected via road from Mussoorie (40 kms) and Chamba (24 kms) as well, which are well connected with other cities in north India including Delhi. Dehradun has the nearest railhead and airport. Visitors can hire a taxi from there to Kanatal and further.

It is a beautiful trek offering a breath-taking view of Himalayan peaks. So, don’t get aback and miss out on this place because one you reach the top, you will be mesmerized.

Surkanda Devi trek is now becoming popular trek for beginners. If you want dense forest experience , then there is a jungle trek for around 3-4 kms which take 2-3 hours. Once you reach on top , you will get 360 degree view of Himalayan Snow peaks. Travelers are now getting attracted for Surkanda devi trek.Surkanda devi is one of the shakipeeth in india. and have religiously very famous among pilgrims.

Surkanda Devi trek is one among those treks which one should try for a lifetime experience. The place is situated around 8 kms away from Dhanaulti, Kanatal and around 22kms from Chamba in Uttarakhand.  The trek is well known because of Surkanda Devi Mandir, that has a hindu mythology. This temple is one of the 51 shakti peeth located all over the India, dedicated to Goddess Surkanda. The temple offers 360-degree scenic view of adjacent Himalayan peaks and is famous for its architecture and the location.

As per the Mythology the origin of the temple can be attributed to Goddess Sati- wife of Lord Shiva. Goddess Sati burned herself in her father’s sacrifice when he embarrassed lord Shiva. We know that how Lord Shiva performed tandav with the dead corpse of Sati and how by the Sudarshan Chakra the body was isolated part by part by Lord Vishnu. When lord Shiva was passing over this place on his way back to Kailash carrying Sati’s body, her head fell at the spot where the modern temple of Surkhanda Devi stands and due to which the temple’s got its name as sirkhanda which is now called Surkhanda.

The trek is around 3 kms which would take 1 hour to reach the top. It is so steep at some point that it is not advised for weakhearted or physically unfit people, especially those who have Asthma problem. You can either walk or take a horse ride. As you pass by, you hault for some soft drinks or snacks at the midway stalls. Due to the dense forest all around, the temple is covered with fog maximum of the time of the year.

Talking about the accommodation, you will find numerous of budget and luxury hotels, as well as guest houses, homestays in Kanatal, Mussoorie which is around 40 km, Chamba and Dehradun.

Surkanda devi is accessible throughout the year. But the best time to Visit this temple during summer time. Though in Winters you will find snow here. But if you love to explore snow, then winters are not he bad idea to explore Surkanda devi. But make sure you can handle Hills winter as the temperature goes down to 0 degree in night, which makes the normal life little hectic.

The Ganga Dussehra festival is celebrated in the temple with a lot of enthusiasm every year between May and June that attracts a lot of individuals. In the winter season, the place will be covered with blankets of snow. So, trekking during summer season that is from April to July is considered to be the best time.

So, next time whenever you plan to visit kanatal or dhanaulti or mussorrie , you must explore surkanda devi temple. Its totally your choice, if you want trek upto temple or go via stairs. This is totally your choice. Because reaching uphill is worth to explore.

So lengthy, vehicles would go till the town of Kaddu Khal from where guests needed to approach the sanctuary. As of late, a ropeway has been developed from Kaddu Khal till the top to help guests. The very nearly two hour journey has now been diminished to a just about brief excursion by the ropeway. The ticket is valued at Rs 177 for every head to begin with.

As per media reports, the sanctuary has previously seen an expansion in the quantity of guests since the kickoff of the ropeway. In any case, nature darlings are stressed that the short and grand mountain trail could fall into neglect as an ever increasing number of individuals take the ropeway.